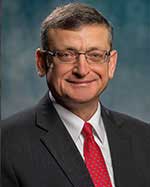 Mark A. Bellini, retired U.S. Army Brigadier General, earned a bachelor&rsquo;s degree in Economics in 1979 from then Edinboro State College and was commissioned a Second Lieutenant in the U.S. Army through the Edinboro ROTC program. During more than 32 years of active duty service, he held a variety of command and staff positions, both in the U.S. and overseas.

Following his retirement from the Army in 2011, he was vice president and general manager for ITT Exelis, later Exelis Corporation. Prior to joining the Council of Trustees in 2018, Bellini served on the Edinboro University President's Advisory Council since 2011.