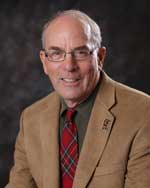 Daniel E. Higham has been a member of the Edinboro University Council of Trustees since 2009 and secretary from 2015 - 2019. He now serves as the vice chairperson.

A 1970 Edinboro graduate with a Bachelor of Science in Math/Science, he is president of U.S. Bronze Foundry and Machine, Inc. in Meadville, Pennsylvania.

In 2000, he received the Eberly Award for Volunteerism, the highest award bestowed by the Pennsylvania State System of Higher Education.

His community involvements include leadership posts with the Precision Manufacturing Institute and Crawford County Historical Society, both in Meadville.