Dr. David Hurd, Professor of Geosciences and Planetarium Director at PennWest Edinboro, has been educating students on the wonders of science for 34 years. 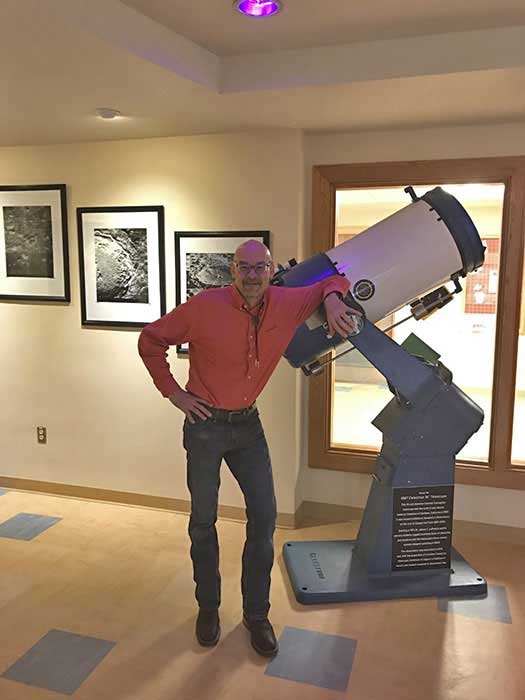 With his trademark high energy, vast academic knowledge and inquiry-based pedagogy, Dr. David Hurd has gained a reputation as one of the region’s most engaging professors. A two-time recipient of the Educator of the Year Award at PennWest Edinboro, Dr. Hurd is consistently nominated for a multitude of awards and was awarded the Emmons Award through the Astronomical Society of the Pacific.  This is a highly prestigious award recognizing and celebrating outstanding achievement in the teaching of college-level introductory astronomy for non-science majors.  Hurd also delivered the keynote address to the first and only national conference of planetarians in St. Louis in 2017.

In addition to his invaluable contributions in the classroom, Dr. Hurd manages the PennWest Edinboro Planetarium and provides the local community with interactive and engaging live and online planetarium programs. Every year, thousands of K-12 and general public participants visit the planetarium for educational programming. The planetarium has received national recognition for Dr. Hurd’s inclusion of all learners in STEM objectives.

Considered a pioneer in the field, he has dedicated the last 20 years to producing and implementing tactile astronomy materials for the blind and has facilitated workshops on teaching astronomy to the visually impaired.

Partnering with Dr. Cass Runyon of the College of Charleston, Hurd has produced products for NASA that have helped bridge the gap between the research community and special needs students. Highlights of their work include the “Tactile Guide to the Solar System” and other astronomy tactile products. Recently, Hurd served as co-principal investigator on a major Department of Education grant that educated science teachers on how to better address the needs of students with visual impairments.

With support from NASA’s Lunar Science Institute, Dr. Hurd wrote and directed the production of a primer on lunar cratering titled, “Getting a Feel for Lunar Craters.” The book showcases custom-made tactile representations of major crater types found on the moon, descriptive text in accessible PDF form, and a digitally mastered recording of the text. More recently, Hurd wrote and directed the production of a tactile book highlighting the Mars Science Laboratory and Curiosity rover and innovative tactile books on light pollution and Earth from space.

Dr. Hurd is honored to be involved in efforts to ensure that all learners have an opportunity to learn about the wonders of our universe and continues to push for expanded experiences and opportunities for all students to highlight STEM interests and careers.

In addition to his professional efforts, Dr. Hurd shares a personal connection to those with disabilities as two of his four sons have significant disabilities. His personal experiences, character and academic passion have shaped his passion and desire to see expanded opportunities in learning about science.