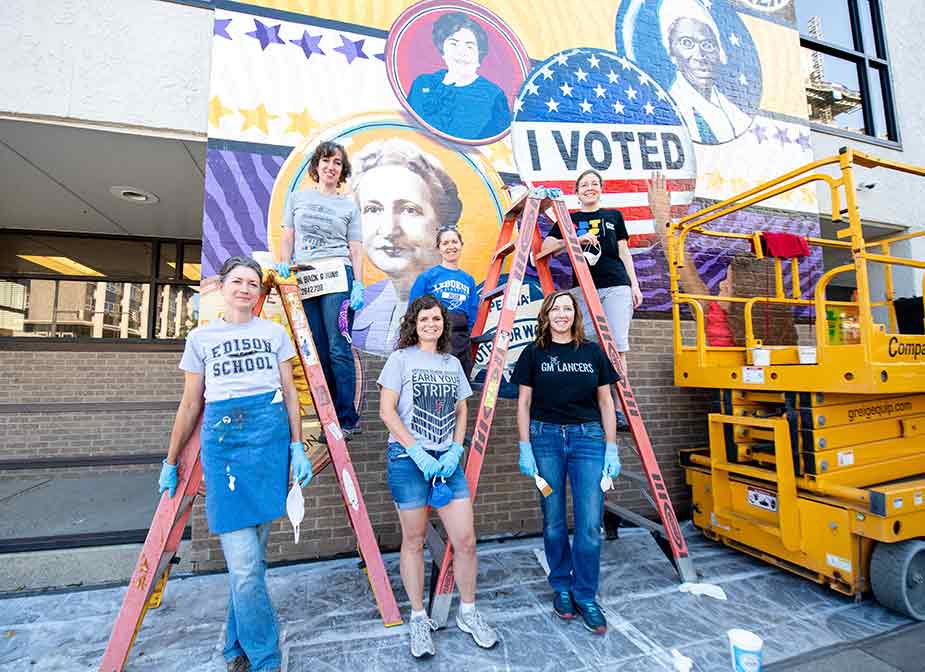 EDINBORO, Pa. – Edinboro University faculty, alumni and local art educators are using artistry to mark the 100th anniversary of one milestone in women’s voting rights movements. They use public space and a non-profit building as the canvas.

The mural was completed in time to recognize the centennial of the 19th Amendment, which declared that it was unconstitutional to deny women the right to vote.  Ratified on Aug. 18, 1920, the amendment expanded voting rights substantially but there was more work to be done. The struggle against racism and voter suppression continued long into civil rights movements.

“The mural also looks to the future as we work toward voter participation,” said Dr. Mary Elizabeth Meier, head of Edinboro University’s art education programs. “It commemorates the multi-storied journeys of voting rights for women.”

Meier joined Edinboro University colleague Suzanne Proulx, chair of the Art Department, and Edinboro alumni Christina Wolfe-Martin and Kathy Johnson, both of whom are art education teachers in Erie County, to complete the mural. They are a team of six artists, which include local art educators Jennifer Peters and Barbara Wegner.

“We were able to do more together as a group of six than we would have done individually,” Johnson explained. “Each group member has different skills, and strengths. Harnessing those strengths is what makes it work.”

The mural features portraits of Helen Schluraff, a former leader in the Erie County League of Women Voters and the first female county commissioner in Erie County and in the Commonwealth of Pennsylvania, Joyce Savocchio, Erie’s first female mayor, Sojourner Truth, an abolitionist and women’s rights activist, and Pulitzer Prize-winning journalist and civil rights leader,  Ida B. Wells. Wells was one of the founders of the NAACP.

The artists designed the mural based on “Her Voice, Her Vote,” the centennial commemoration prompt from the Erie County League of Women Voters. The Erie Downtown Partnership provided the project management, while Erie Arts & Culture provided support in the grant proposal phase.

The chosen site for the mural is the headquarters of Housing and Neighborhood Development Service (HANDS) of Erie, located at 7th and State Street in Erie.

The initial work for this mural began in the fall of 2018 with the call for grant proposals. The team then assembled a group of art educators from the region. Early meetings involved researching voting rights and multiple movements of women’s suffrage.

“We learned so much during these early days, which greatly influenced the finished mural,” Wolfe-Martin said. “We worked together to compose a thoughtful image all the while giving special attention to the complex subject matter.”

After attending a local mural workshop, the artists decided to use a non-woven mural cloth called Polytab. The weather-resistant material was primed, painted, and then adhered to the building.

Artists worked together at the beginning of this project and then worked individually to complete the imagery. Each area of the mural is hand-painted using three layers of paint. Once complete, the mural pieces were assembled to check for alignment and cohesiveness of design and color choice.

The wall and the panel pieces were coated with a very thick layer of adhesive prior to being positioned in place. The mural was assembled like a large puzzle – strategically planning for overlapping to protect against the elements. Once installed, the artist team made paint touch-ups and sealed the entire mural with layers of a protective topcoat.

“It was emotional and moving to hear the responses of pedestrians and people with shouts of support at the stoplight,” Meier said. “The theme of civic engagement, equal rights, and voter participation is on everyone’s mind. We can’t forget that there are still barriers to voting access that we must work to overcome.”

The list of Edinboro University faculty, students and alumni who participated in community painting events grew under the guidance of Edinboro’s Art Department.

In the past two years, Dr. Leslie Sotomayor’s art education students, Dr. Melissa Gibson’s communication students and Dr. Mary Jo Melvin’s literacy students all volunteered for local community painting projects to increase the number of artists who had a hand in the mural making. County Executive Kathy Dahlkemper – an Edinboro University alumna – participated in the naturalization ceremony for new U.S. citizens in February. Following this ceremony, Dahlkemper, art education students, and new citizens, painted on three of the mural panels at the federal courthouse in Erie.

Community-oriented painting events are important for Edinboro students, not only for the creative process, but also for bringing awareness to current events, Meier said. “Art making and teamwork can be an important site for learning about important social and civic issues,” she said. “Art raises awareness.”