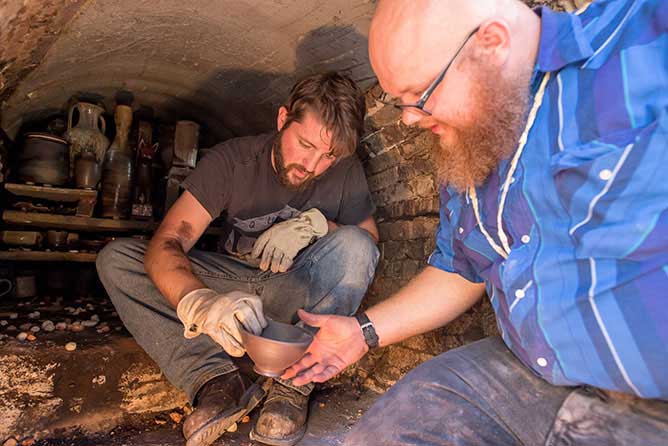 Edinboro University ceramics students are fired up about a recent throwback to ancient art-making methods.

This fall, students in EU’s art department renovated and utilized an ancient ceramics firing kiln called an anagama – which uses wood instead of natural gas or electricity as a heating source.

“There’s something very special about firing an anagama, because this was one of the original ways that people fired ceramics,” said EU senior Noah Kildoo, who is majoring in Studio Arts, with a concentration in ceramics. “And I think that it feels primal, because you can actually see the kiln breathe.”

Anagama kilns – or “cave kilns” in Japanese – date back to the 5th Century in Japan, when early ceramics artists constructed wood-fired kilns to finalize the glazing process. Originally built by digging tunnels into clay surfaces, anagama kilns feature a firing chamber with a firebox to hold the burning wood source and a flue at the opposite end for ventilation.

“We have a very well-rounded art program here at Edinboro, and we have some very high-tech kilns,” said Charles Johnson, MFA, art professor and ceramics instructor at Edinboro University. “This is a very old technique – rather the other end of that spectrum.”

During a basic ceramics process, the artist creates the design of the object through wheel-throwing clay or hand-designing the piece. After the item dries, it undergoes a bisque-firing process to remove chemical and mechanical water from the clay. After a coating of glaze is applied to the product, it is then glaze fired – often in kilns using natural gas or electricity.

For the anagama kiln, Edinboro students chopped nearly four cords of wood to supply heat for the fire glaze. Burning wood in the kiln produces heat in excess of 2,400 degrees Fahrenheit, which causes ash to interact with the ceramics to create a natural textured glaze.

“The glaze firing is what takes it from an early, crusty state into a finished product,” Kildoo said. “The burning wood creates some of these incredible natural effects on the ceramics.”

Kildoo, who joined a group of 20 students and art faculty for the unloading of the kiln on Oct. 5, spent more than a week’s worth of time preparing and executing the anagama kiln firing. After students split the necessary firewood, they spent seven hours loading the kiln and 48 hours firing it.

“It’s quite an exciting experience because you get the entire studio to come out, and everyone is throwing wood into the fire box,” said Kildoo, a native of Grove City, Pa.

Johnson said that the project wouldn’t have been successful without the teamwork from start to finish.

“These students are all working together on this,” said Johnson, who joins Lee Rexrode, MFA, as Edinboro’s specialized ceramics faculty. “One or two people can’t fire this kiln. It takes a minimum of six or eight.”

Edinboro’s anagama kiln is located in the ceramics annex behind Loveland Hall, which houses the art department’s Bates Gallery, on EU’s main campus.

To learn more about award-winning degree programs in fine and applied media and studio arts at Edinboro University, visit art.edinboro.edu.