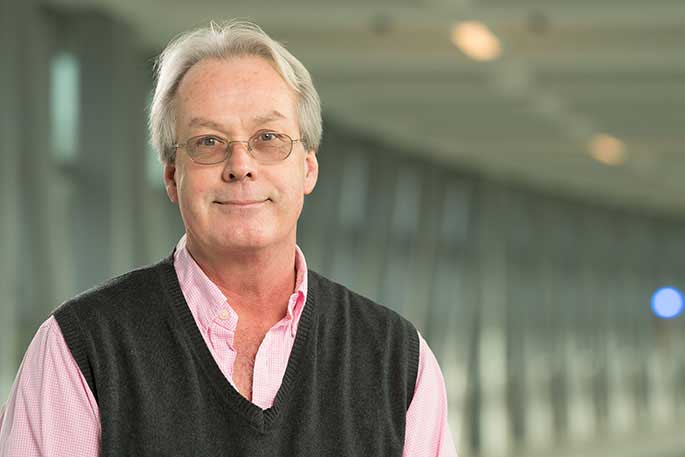 Edinboro University professor Lee Rexrode, who teaches ceramics in Edinboro’s Art Department, was named as a recipient of the 2020 Excellence in Teaching Award, from the National Council on Education for the Ceramic Arts (NCECA).

The NCECA Excellence in Teaching Award recognizes individuals that have demonstrated excellence in teaching and in their own creative work, have previous recognition for and a history of awards in teaching and have highly visible former students in the field.

“It is truly an honor to be selected for my reputation in teaching ceramic arts at Edinboro University,” said Rexrode, who was unanimously selected by the NCECA Board of Directors. “This – in no small part – is due to all of the successful Edinboro alumni we have working in the field of ceramics and making a positive impact.”

As Edinboro University’s Art Department celebrates a milestone of ART100 and the centennial anniversary of the department, Rexrode is also preparing his own career highlight – retirement from Edinboro. After teaching ceramics at Edinboro for 29 years, Rexrode will retire at the end of December.

“To be honored by peers is one thing. But to have that honor initiated by your students is a whole different level,” said Dr. Scott Miller, dean of Edinboro University’s College of Arts, Humanities and Social Sciences. “For years, Lee has illustrated the high quality that our Art Department exemplifies on a daily basis – which is imparted to our students.”

Rexrode earned his Master of Fine Arts degree from Rochester Institute of Technology and served as the head of the Ceramics Department at the Worcester Center for Crafts in Massachusetts throughout the 1980s – until his arrival at Edinboro University in 1990.

He has taught workshops throughout the country at locations such as 92nd Street Y in New York City, Baltimore Clayworks, Arrowmont School of Arts and Crafts (Tennessee) and El Camino College (Los Angeles).

In 2001, he toured China, researching contemporary and historical ceramics and lecturing at the Yixing International Symposium, Jingdezhen Ceramic Institute and the Central Academy of Fine Arts in Shanghai.

Rexrode, whose expertise is wheel-thrown pottery, has published images of his work and written articles for “Ceramics Monthly” since 1989. In 2009, he served as co-juror for the 88th Annual Toledo Federation of Art Societies, Toledo (Ohio) Art Museum, and curated American Ceramics entries for the International Onggi Competition in Ulsan, Korea.