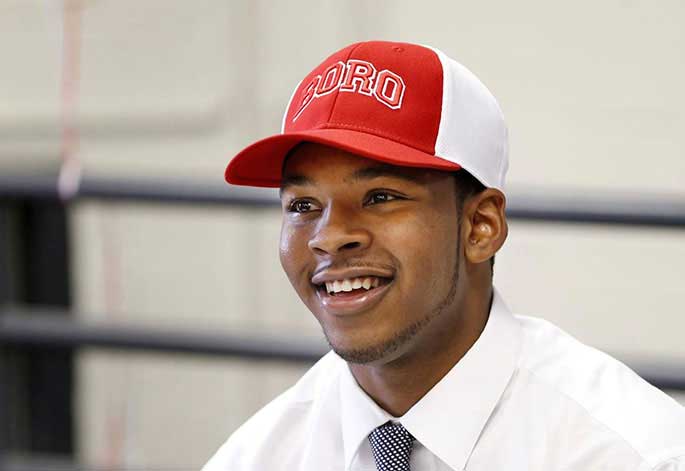 November 22, 2012 started like any other Thanksgiving for 16-year-old Dupree, a sophomore at Thomas Dale High School near Richmond, Va., and captain of the football team. He enjoyed holiday dinner at his aunt’s house before returning home with his 10-year-old brother, their mother and her former boyfriend.

An argument between his mother and her ex-boyfriend ensued on the front lawn, and the dispute quickly became violent. Dupree stepped in to protect his mother as she went inside to call the police. While locking the door, Dupree heard gunshots. A bullet penetrated the door and struck him in the stomach. The gunman barged into the home and continued shooting, wounding Dupree’s mother and brother.

“He broke into our house and he shot me, my mom and my younger brother,” said Dupree, a wheelchair basketball player at Edinboro. “I almost didn’t live, and I didn’t know if my family would live either.”

Dupree spent three months in the hospital and endured 10 surgeries. Complications resulted in the amputation of his left leg above the knee, and he was homebound for six months. His hopes of making the varsity football team the following year were dashed, but his spirit didn’t falter.

“We all survived, and I feel like it was my second chance to be somebody,” said Dupree, who finished high school on time and started college as a physical therapy major at John Tyler Community College.

In 2015, he volunteered at Quinnipiac University’s Camp No Limits in Connecticut for children and adolescents with amputations. There he became involved with adaptive sports.

“Being an amputee and a physical therapy student, I could relate to the kids and actually show them things using my prosthetic,” Dupree said. “I taught them a lot of things and they showed me a lot too because they introduced me to adaptive sports.”

“When I’m on the basketball court, I play as hard as I can – twice as hard as I ever did playing football – because I know the feeling of being an athlete one day and the next day you’re not able to do that anymore,” he said. “I know that things could change overnight and that just makes me work harder and be tougher.”

Following the 2017 National Wheelchair Basketball Tournament in Louisville, Ky., Edinboro University’s Head Coach Jim Glatch invited Dupree to join the Fighting Scots. He decided to take a semester off before coming to Edinboro and used the extra time to establish Protect My Brother, an organization dedicated to raising awareness against gun and domestic violence.

With the help of a friend, he began selling T-shirts and donating the profits to various events and organizations in the community.

“It took me a while to realize, after becoming a survivor of gun violence and domestic violence, why I survived and why others go through what I did and don't survive,” he said. “I want to raise awareness and have the numbers for gun violence around the country go down.”

Dupree is also working with a nonprofit organization called Ainigriv Adorn to obtain nonprofit status and is optimistic about the future of the organization.

“If I fall, I get back up,” said Dupree, who is pursuing a bachelor’s degree in Communication Studies and a minor in coaching at EU. “My experiences have taught me to never give up on anything – not just as an athlete, but as a person. I’m still living my dream even though it’s in a different way.”

“His story is so powerful,” said Dr. Tony Peyronel, an Edinboro faculty member who is serving as the center’s executive director. “We are looking forward to helping him realize his business goals.”

The Innovation Beehive Network has already attracted more than $1.5 million in grant funding, according to Rosmari Graham, Edinboro’s director of Grants and Sponsored Programs. The funding has been split between the four institutions.

For more information about EU’s Center for Branding and Strategic Communication, contact Dr. Peyronel at (814) 732-2166.