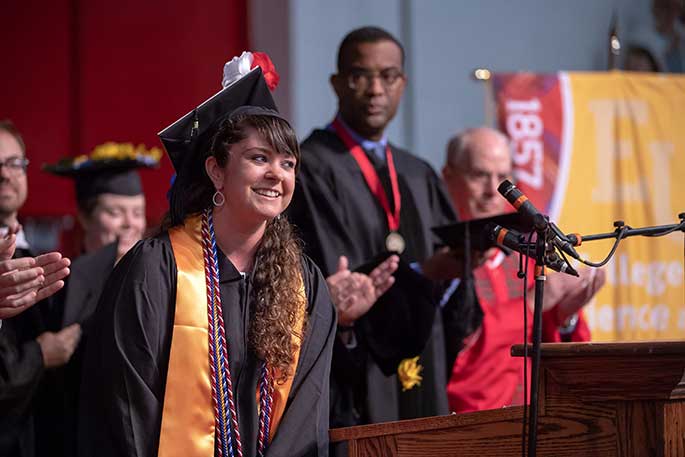 “I am over-the-moon ecstatic to win this award. Words cannot even begin to describe how flattered and honored I am,” said Hallock, who has worked as a tour guide for undergraduate admissions and an orientation leader for the Academic Success Center. “The leadership and educational opportunities I have received at Edinboro University are a huge reason I received this award.”

The annual award recognizes a college senior or graduate student who has shown excellence in the classroom, contributed to the local and national chapter by holding an executive office and promoted campus activity and organizations. Along with her academic pursuits, Hallock also serves as assistant marching band director for Iroquois High School and color guard instructor for Titusville High School.

“Kaitlyn is a wonderful and talented vocalist who is extremely dedicated to her studies, the music department and Edinboro University,” said Dr. Gary Grant, interim chairperson of the Music and Theatre Department. “She is very ambitious, and I have no doubt she will be successful in her future endeavors.”

For the 2017-2018 academic year, Hallock served as the president of Zeta Upsilon, the Edinboro University chapter of SAI and was the chairperson of the bylaws committee. She has previously served as the chapter’s treasurer and service chairperson.

“I have been tremendously fortunate to have had such great educators and musicians serve as my mentors,” Hallock said. “Because of them, I truly have been pushed both academically and musically to be the best version of myself.”

Following her undergraduate degree, Hallock enrolled in Edinboro’s College and School Counseling program, where she intends to pursue a master’s degree. Her future plans are to enter higher education, working on community outreach on behalf of the arts while also teaching private lessons and working with a marching band.

In addition to excellence in academics, the student must be a recipient of the Ruby Sword of Honor, which is given to the SAI member who has exceptionally fulfilled their office duties and shown strong leadership within their respective chapter.

Founded in 1903, SAI is a national organization that promotes interaction among individuals committed to music and campus life. Members collaborate with faculty, administration, student groups and music professionals to encourage and support musical ventures on campus and in the community.

The Zeta Upsilon chapter is part of the provincial Region VII of SAI that includes institutions throughout Michigan, Ohio, Kentucky, Virginia and Tennessee. Edinboro is the only Region VII member in Pennsylvania. Edinboro University’s branch of SAI was founded on Oct. 31, 1976 – at what was then the Edinboro State College.

With this award, Hallock earned the highest award for which a collegiate member is eligible.