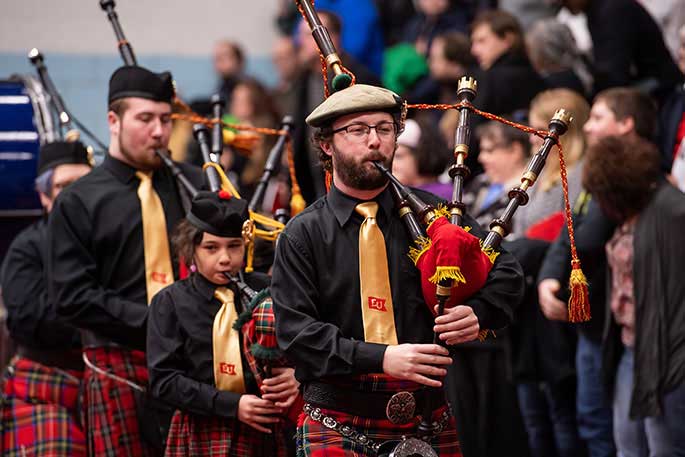 As the COVID-19 pandemic forced many educational institutions to modify summer programming, one Edinboro University faculty member is leading a charge to temporarily convert a Pittsburgh music school to a virtual arena.

Sean Patrick Regan, an award-winning professional bagpiper and instructor at Edinboro University, has led the digital efforts of Pittsburgh’s Balmoral School of Piping & Drumming to transition to online learning through Zoom sessions and virtual performances.

The online schools have attracted new students from faraway states and nations, for whom travel to Pittsburgh would’ve been prohibitively expensive. This has led to the school’s decision to include online programing as part of the regular schedule once in-person gatherings become possible.

“I can’t say enough nice things about Sean,” said Elaine Lee, marketing director for Balmoral School. “He has almost single-handedly pulled the school online. Even as he juggled Zoom schedules and fixed tech problems, he found time to help students with their piping so they would be prepared for class. Edinboro is lucky to have him.”

In addition to the summer classes and one-on-one instruction, Regan’s team was able to include videos on various piping topics, as well as tours of bagpipe and reed manufacturing facilities in Scotland. The summer instructor concert – traditionally available only to Balmoral School students – went public this year on YouTube.

Student evaluations of the summer sessions were full of praise for Regan.

“Sean did an excellent job,” one student noted. “Patient and polite while coordinating the breakout rooms, timings and troubleshooting individual problems with Zoom. Regan’s work behind the scene really helped me to be confident that people were ready for class.”

Balmoral Pipes & Drums is a 501(c)(3) nonprofit educational organization founded and maintained in Pittsburgh since 1979. The band holds weekly Zoom practices, which Regan leads from his virtual office.

Plans are currently underway for the 14th Annual Balmoral Classic competition, to be held Nov. 14 this year. In 2019, Regan produced the first livestream viewing of the classic competitions for Facebook. For 2020, the school will be taking the classic completely online. Competitors will send in recorded performances, which will then be sent to an international panel of judges.

Regan is a third-generation bagpiper, who completed a degree in Music Education – with the bagpipe as his primary instrumental focus at Edinboro University.  After teaching at the middle/high school level and privately for several years, he has returned to higher education as the pipe band director at Edinboro and is concurrently pursuing a Master of Music in Bagpipe Performance at Carnegie Mellon University.

Professor Regan has been at the top of American solo bagpipe competition for more than a decade, and is a former national and world solo piping champion. He has played in pipe bands at the Midwest, North American, Canadian, European and World Pipe Band championships, winning the Midwest and Canadian championships