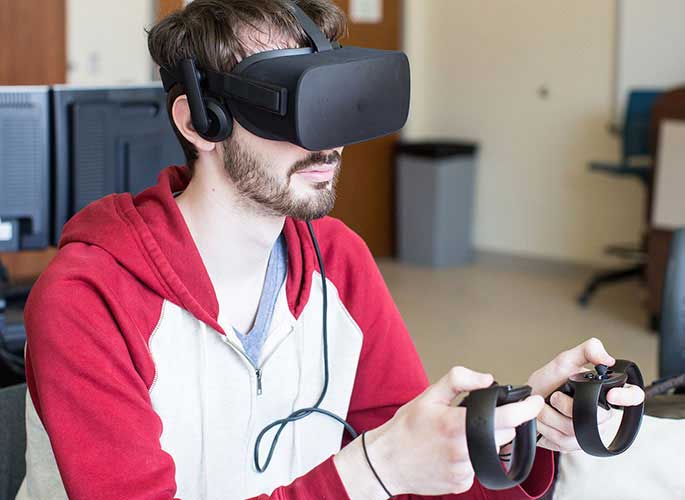 For the fifth consecutive year, Edinboro University Game and Virtual World Development track was ranked among the top programs in Pennsylvania.

Animation Career Review, a leading source of information and rankings in the game design sector, granted Edinboro the No. 5 spot in the Top 5 Game Design Schools and Colleges in Pennsylvania - 2018 list. An award-winning program in just its seventh year at Edinboro, the rigorous program prepares students to face the challenges of this rapidly growing field.

“Edinboro offers students the unique experience of taking classes from our top-notch computer science and art departments,” said Dr. Anne Quinn, chairperson of the Department of Mathematics and Computer Science. “I am pleased to see our program was recognized as being one of the top programs in the field.”

Game design students complete general coursework in the computer science, mathematics and physics curricula to prepare for a variety of careers such as game developers and engineers, game programmers and modeling and simulation development. In addition to being one of the most rigorous tracks in the Math and Computer Science Department, the Game and Virtual World Development track intersects with the Art Department, with required art courses such as three-dimensional design, traditional animation and computer animation.

EU’s computer science prospectus includes a theoretical track that received national accreditation from the Accreditation Board for Engineering and Technology (ABET).

Across the U.S., there is an increased demand for animation and visual effects in everything from sophisticated video games to movies to corporate presentations. Jobs in this field are expected to grow 10 percent annually – faster than most other occupations between now and 2026.

For more information about EU’s Mathematics and Computer Science Department and the Game and Virtual World Development track, visit www.edinboro.edu/game-design.