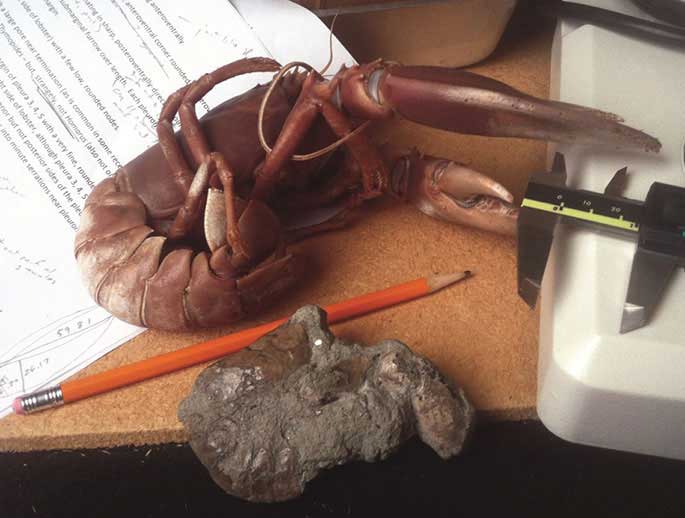 Edinboro University professor Dale Tshudy has published more than 30 peer-reviewed articles and book chapters about lobsters and other crustaceans, and has been cited in dozens of magazines and newspaper articles.

A practicing paleontologist and EU faculty member since 1992, Tshudy’s next manuscript, scheduled to be published in the Journal of Paleontology, reports a new species of fossil lobster. The species is based on a single, well-preserved specimen from Oligocene age rocks of Hungary – from nearly 25 million years ago.

“The new fossil was sent to me unsolicited from a paleontologist in Austria,” said Tshudy, who has researched clawed lobsters since 1985. “All paleontologists work to improve the species-level data base in their taxonomic group of interest, whether it’s dinosaurs, trilobites or crustaceans.”

This new species, named Homarus hungaricus after its discovery location in Mány, Hungary, is morphologically very similar, and closely related, to Homarus americanus – the Maine or American lobster. Although the species relates to the same genus as the American lobster, it exhibits a combination of features – grooves, spines, etc. – on its shell that are unique to the new species.

“What I have observed in the clawed lobsters is that it’s usually not some distinctive feature that’s unique to the species,” Tshudy said. “It’s generally that combination of features that sets it apart from existing species.”

“Naming species and trying to establish a meaningful taxonomy is only the start of what paleontologists do,” said Tshudy, who specializes in ancient marine animals. “I collaborate with paleontologists and marine biologists year-round. Some of my best collaborators are in China and New Zealand. Because of time zone differences, our projects can progress almost non-stop.”

When researchers discover a potentially new species, the standard procedure is to follow a process that could take several years to complete. First, the team obtains the new material from the field or from unstudied museum collections. If necessary, paleontologists dig specimens out of the rock with mini-jackhammers while working under a microscope.

“We’re not talking about museum displays for the general public,” Tshudy said. “We dig through the behind-the-scenes collections in drawers or boxes of unstudied or little-studied material.  If we see something curious, we might borrow the items for a year or two.”

After the piece is collected, researchers then describe the specimen in exhaustive detail, and then compare what they found to all known species – fossils and living. If the material is unique, then it can be named based on the International Code of Zoological Nomenclature.

Finally, the species becomes official when it is published in a peer-reviewed international journal, such as the Journal of Paleontology.

“I find my work endlessly fascinating,” said Tshudy, who has taught a variety of courses at EU in geology, paleontology and oceanography and collaborates with biologists in the United States, Europe and Asia. “I’ll never be jaded about collaborating with scientists around the world, working in the Smithsonian, collecting in the ocean or publishing papers. I show up every day for research thinking I’m so lucky to be doing this.”

Aside from professional research, Tshudy said that his paleontology experience boosts his motivation for his EU classes. Much of his research informs the content of his courses each semester.

“Just as importantly, it gives me vitality,” he said. “I am genuinely excited about the subject matter – largely because of my research.”

Photo caption: Edinboro University professor Dr. Dale Tshudy is credited with naming a new species of lobster – Homarus hungaricus – which was discovered in Mány, Hungary. The lobster is morphologically very similar, and closely related, to Homarus americanus – the Maine or American lobster.