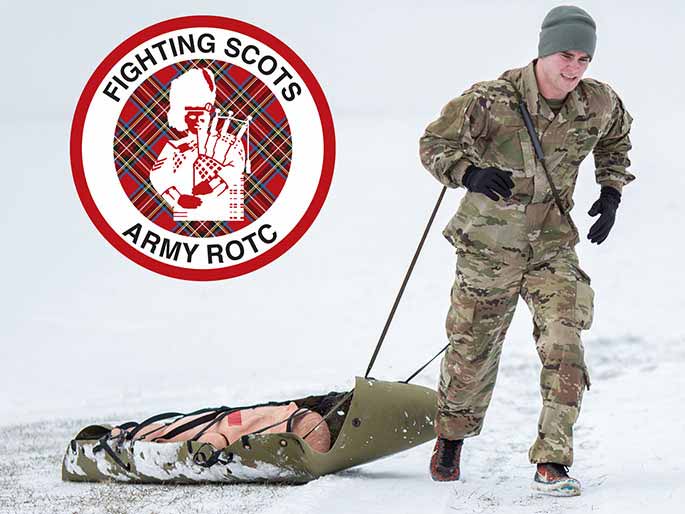 “The cadets have gone above and beyond to learn, grow and give back to the battalion,” said Lt. Col. Benjamin Kavanagh, commander of the Fighting Scots Battalion. “I want to thank this class for their candor and commitment to the battalion, and – most importantly – to each other.”

“The Army is a family – sometimes literally, sometimes figuratively,” said Zilhaver, who currently serves as an ROTC brigade commander in the U.S. Army. “We take care of each other through the best of times and the worst of times.”

“You are now beginning your new life as an officer in the United States Army,” said Eder, who earned an Honorary Doctorate from Edinboro University in 2013 and holds both a bachelor’s and master’s degree from Edinboro. “Where we are today is beginning a new adventure. This is your Army now. Take care of it for the rest of us.”

Edinboro University President Guiyou Huang credited the battalion for dedicated their collegiate career to public service and for putting the safety of the nation ahead of their own.

“I am truly grateful for the sacrifices that you are willing to make to keep our nation safe. Your courage and selflessness speak volumes to your character,” Dr. Huang said. “The training and education you have received during your time at Edinboro has shaped your future. It is up to you to take that knowledge forward and continue to build upon it to become the best you can be.”

Ethan Dennis was commissioned as an active-duty officer in the United States Army Medical Services Corps. He earned his degree in Health and Physical Education and participated in ROTC club for three years.

Zachary Hackett was commissioned as an active-duty officer in the United States Army Ordinance Corps. He was a member of the Color Guard team, Army Ten Miler and Arctic Challenge Captain. He earned his Bachelor of Science degree in Business Administration – Accounting.

Noah Hunter was commissioned as an active-duty aviation officer. He was recognized as a distinguished military graduate ranking within the top 10% in the nation. He was a member of the Ranger Challenge that won the regional competition and competed at the Sandhurst competition. Hunter earned his Bachelor of Science degree in Psychology.

Kyle Kanell commissioned as an active-duty infantry officer. As a cadet, Kanell completed the Global Officer Project in Morocco for Arabic acquisition after his sophomore year. Kanell earned a Bachelor of Arts from Allegheny College in International Relations and minored in Political Science and Adaptive Leadership (Note: Since 2002, Allegheny students participate and are commissioned through Edinboro ROTC, but earn degrees from Allegheny).

Halle Lienhart commissioned as an active-duty engineer officer. As a Cadet, Lienhart competed on the Ranger Challenge Team for two consecutive years and was part of the Sandhurst team that competed at West Point in the spring of 2019. She earned a degree in Health and Physical Education with a teacher certification.

Camden Pauli commissioned as an active-duty field artillery officer. He was a member of the Color Guard team, Ranger Challenge, Arctic Challenge and Cannon Crew. He earned his Bachelor of Science degree from Edinboro in Business Administration, concentration in Finance.

Corinne Pfeil commissioned as a reserve officer in the United States Army Medical Services Corps. On campus, she was known for being president of the Shooting Sports Club. She earned her Bachelor of Science degree in Human Performance with a concentration in Physical Therapy.

Brian Reaugh commissioned as a reserve adjutant general officer. As a cadet, Reaugh ran in the Army Ten-Miler his sophomore and junior year. He has earned a degree in Criminal Justice with a minor in Adaptive Leadership & Military Studies.

Chad Rogers was commissioned as an active-duty aviation officer. He is recognized as a Distinguished Military Graduate, ranking in the 10% of all cadets in the nation. As a cadet, Rogers competed on the Ranger Challenge Team for four consecutive years and was elected Captain his senior year. He earned a degree in Criminal Justice with minors in Adaptive Leadership & Military Studies and History.

Jeffrey Werner commissioned as a quartermaster officer in the Montana National Guard. He enlisted into the Army National Guard when he was 20 years old and decided to join the ROTC program on campus after completing basic training.

To learn more about the Fighting Scots Battalion and the journey from training to commissioning, visit www.edinboro.edu/ROTC.