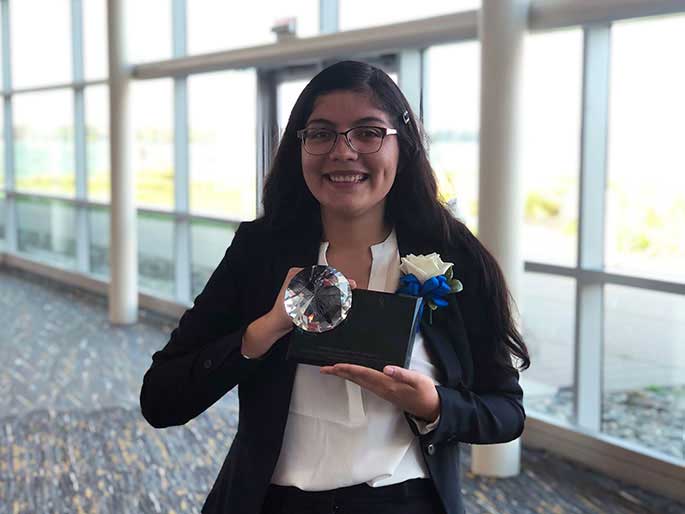 Guerrero-Vasquez is the first Edinboro University student to earn the regional award.

“As a first-generation college student, I really value the experiences that I have been able to gain at Edinboro,” said Guerrero-Vasquez, who also minors in Sociology and Psychology and serves as a representative on the University-wide Strategic Planning Committee. “I am so grateful to have had the opportunity to learn from the female leaders who facilitated the ATHENA Connections program at Edinboro, my professors and all of the others who have shown me how to become a leader.”

A vocal advocate for students – particularly on the issues of community development and the needs of underrepresented minority students – Guerrero-Vasquez holds professional leadership positions with several campus organizations including the “Take a Stand against Sexual Violence” Club, Phi Alpha Honor Society for Social Workers and Latino Student Organization.

In her role with the “Take a Stand against Sexual Violence” Club, she led the charge to partner with the Crime Victim Center in Erie and the Safe Journey organization in Union City to provide internal and external support resources to sexual assault survivors. She is working to expand membership in the Take a Stand organization and increase awareness of support resources in communities surrounding campus.

Guerrero-Vasquez is a member of Edinboro's ATHENA Connections, the National Society of Leadership and Success, the International Student Affiliation, the Social Work Club and Zeta Tau Alpha sorority.

She also recently served as an enforcement intern for the United States Equal Employment Opportunity Commission in Philadelphia. In this role, she assisted with mediations and settlement conferences, collecting information about equal opportunity complaints. She also served as a translator and interpreter to assist with equity investigations.

“Silenia exemplifies the core principles of the ATHENA leadership model by actively engaging in organizations and experiences that speak to her values and passions. Silenia was nominated to represent Edinboro University because she has focus, drive, compassion and a strong work ethic – she is a striver,” said Monica Clem, executive director of career development and experiential learning at Edinboro, who nominated Guerrero-Vasquez for the award.

Guerrero-Vasquez plans to attend graduate school after graduating in May 2020 and eventually pursue law school.

The ATHENA Young Professional Award recognizes outstanding young students who have the potential to be future leaders. It is one of several award programs offered through ATHENA International, a global non-profit organization dedicated to developing, supporting and honoring female leaders around the world.

Each institution in the ATHENA Erie chapter selects a nominee who exemplifies the principles of the ATHENA Leadership Model to represent her institution. The intent of the award is to provide a meaningful start on the path of leadership for the young professional receiving it. The vision is that by recognizing their excellence, this award will serve to cultivate distinguished opportunities for the recipient and our community.