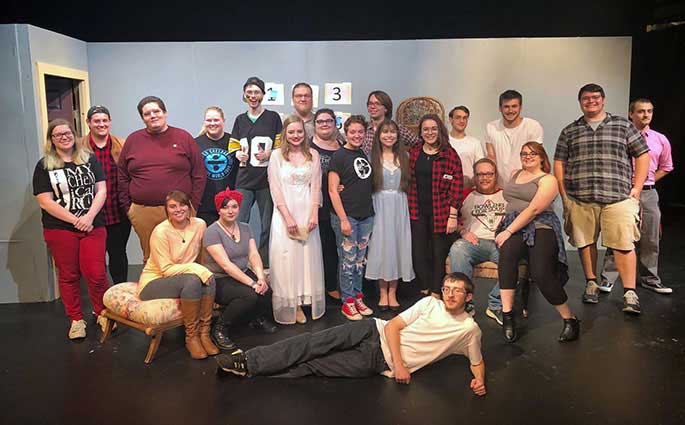 Edinboro University Players, a collective of theatre students from a variety of academic backgrounds, announced the 2019-2020 performance series this week – delivering a mix of mystery, comedy and drama to the stage.

“This is what I love so much about theatre – it is not only storytelling, but also philosophy, literature, culture and art all wrapped up in a package,” said Edinboro University Communication Studies major Mason Kuhr, who serves as Edinboro University Players president. “And then we share it with the rest of the world.”

From Sept. 26 through Oct. 6, University Players will host a competition that pins student-directors against each other in the “Battle of the One Acts.” Students will direct the theatre community and produce a series of one-act plays to which the audience rates each play and decides on the winning entry.

A traditionally popular night of theatre at Edinboro, the Battle of the One Acts will feature leisure, laughter and entertainment from Edinboro University students. Directors and show themes will be determined closer to audition night in August.

“We have a very unique opportunity for our audience and cast members, because our theatre is completely student-directed, and we’re all very excited to show what we have to bring to the table,” said Edinboro student Mikhail Ferree, president of Dramatic Activities on campus.

University Players will present “House on Haunted Hill” from Oct. 31 through Nov. 10 – freely adapted from the classic 1959 horror film starring Vincent Price (“Laura,” “The Ten Commandments”). All seems well when eccentric millionaire Frederick Loren and his fourth wife, Annabelle, throw an unusual party: Five guests must survive one night in the “House on Haunted Hill” for a chance to collect $10,000 each.

But at midnight, Frederick and Annabelle become trapped in the house with their guests. It is then they quickly discover that “fear makes people do amazing things.” Bringing you a spine-tingling evening of entertainment – from the silver screen to the Edinboro stage – Diebold Center for the Performing Arts cordially invites you to attend the world theatrical premiere, directed by Kuhr and Edinboro professor Dr. Roger Solberg.

The spring semester kicks off with “The Crucible” from Feb. 21 through March 1. An adaptation of the 1953 play by American playwright Arthur Miller, the performance is a dramatized and partially fictionalized story of the Salem witch trials that took place in the Massachusetts Bay Colony during the 17th Century.

When blind date newbie Aaron is set up with serial-dater Casey, a casual drink at a busy New York restaurant turns into a hilarious high-stakes dinner. As the date unfolds in real time, the couple quickly finds that they are not alone on this unpredictable evening.

In a delightful and unexpected twist, Casey and Aaron’s inner critics take on a life of their own when other restaurant patrons transform into supportive best friends, manipulative exes and protective parents, who sing and dance them through ice-breakers, appetizers and potential conversational land mines.

Can this couple turn what could be a dating disaster into something special before the check arrives?

“We are working to honor the originality of these productions while giving the cast and crew a chance to showcase their individual talents,” said Edinboro political science major Madison Krol, president of Edinboro’s Alpha Psi Omega. “By the time these shows go up on stage, the time and effort gone into these productions has brought the stories we tell to life.”

Performances are scheduled Thursdays through Sundays at 7:30 p.m. with a Sunday matinee at 2:30 p.m. Doors open 30 minutes before curtain.

Performances are held at the Diebold Center for the Performing Arts, 218 Meadville St., on Edinboro University’s main campus.