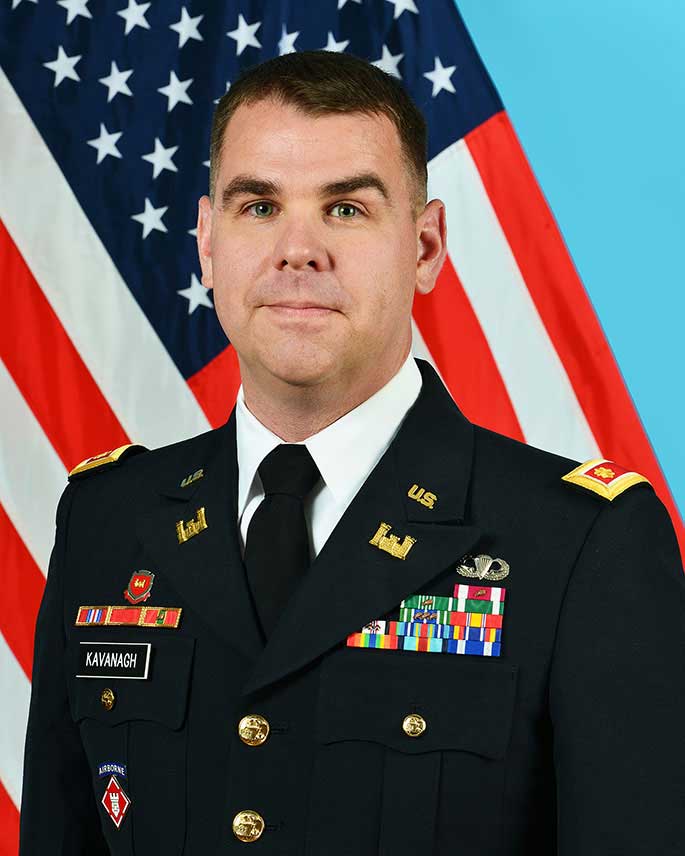 The badge featuring a small oak leaf that Benjamin Kavanagh wears on his military uniform signifies more than the ROTC commander’s promotion as an Army commissioned officer.

This month, the U.S. Army recognized Kavanagh with this promotion from Army Major to Lieutenant Colonel and confirmed his eligibility for Army Battalion Commander.

“My career has really come full circle since I was first commissioned as an Army officer,” said Kavanagh, whose promotion as Lieutenant Colonel became effective in September. “When I graduated as a cadet, I knew I wanted to become an ROTC commander. And 15 years later as a Lieutenant Colonel, I now have direct impact on setting students up for career success.”

Governed by the U.S. Department of Defense, the promotion allows Lt. Col. Kavanagh to compete for and command a unit of 300-800 soldiers or serve as a brigade task force executive officer.

In addition to serving as Lieutenant Colonel in the U.S. Army, Kavanagh has agreed to a 3-year term as Edinboro University ROTC commander with the possibility of an immediate fourth year.

“Working with cadets is always exciting and interesting because they bring a fresh perspective to the military,” said Kavanagh, who originally was commissioned in the Corps of Engineers through Pennsylvania State University in 2002. “Our priority for cadets is academic success and to prepare Edinboro students to serve in a variety of roles within the United States Military.”

Dr. Scott Miller, dean of the College of Arts, Humanities and Social Science and the School of Business, said that he appreciates the efforts Kavanagh brings to the student-focused ROTC program.

“Kavanagh and his team came in to a well-positioned program and were able to build it into one that is thriving and succeeding at the highest levels,” said Miller, who oversees the Fighting Scots Battalion at Edinboro. “His motivation, leadership and professionalism has allowed us to place Edinboro’s program among the more well-recognized programs in the Army.”

Kavanagh said that his decision to become an ROTC commander was solidified when he oversaw the commissioning of his first group of Edinboro University graduates in May 2018.

“The first group of cadets out the door at Edinboro made me realize that we are giving back to the Army and adding our little slice of the military experience,” he said.

Kavanagh’s most recent assignment was with the U.S. Army Africa 517th Geospatial Planning Cell as the officer-in-charge. Previously, he was the lead planner for developing the engineering and site master plans in Senegal, Ghana, Gabon and Uganda and was deployed to Cameroon to construct a contingency location.

Kavanagh, a native of western Pennsylvania, lives in the Erie County area with his wife, Emily, and their sons, Owen (10) and Daniel (7).