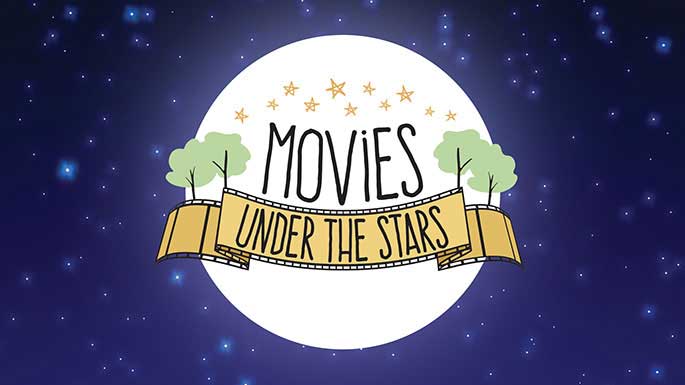 It’s almost summertime in Edinboro, with families starting to plan their warm-weather activities across Northwest Pennsylvania.

Edinboro University and the Borough of Edinboro invite adults, children and families to campus in July and August for a series of four family-friendly films on the outdoor screens.

Starting July 11, Edinboro will host “Movies under the Stars,” beginning at 9 p.m. on the lawns behind the Frank G. Pogue Student Center, 405 Scotland Road. Attendance and parking are free. Guests may park in the lot across from the McComb Fieldhouse or next to the Baron-Forness Library.

Complimentary popcorn and snow cones will be provided. Guests are encouraged to bring lawn chairs, blankets and snacks of their own as well.

“There’s no better place to be in the summer than here in Edinboro,” said Jason Spangenberg, finance director of the Borough of Edinboro and a 2014 Edinboro University graduate. “This film series is an opportunity to gather as a community for some outstanding outdoor entertainment.”

Thursday, July 11: “Shrek” (PG, 1 hour, 30 mins) – Directed by Andrew Adamson and Vicky Jensen, the film tells the story about a mean lord who exiles fairytale creatures to the swamp of a grumpy ogre, who must go on a quest and rescue a princess for the lord in order to get his land back. Based on the children’s book by William Steig, the film stars Mike Myers, Eddie Murphy and Cameron Diaz. Sponsored by Andover Bank.

Thursday, July 18: “The Goonies” (PG, 1 hour, 54 mins) – An acclaimed youth classic from the 1980s, the film follows a group of young misfits who call themselves “The Goonies.” The crew discovers an ancient map and sets out on a quest to find a legendary pirate’s long-lost treasure. Directed by Richard Donner and written by Chris Columbus and Steven Spielberg, the film stars Sean Astin, Josh Brolin and Jeff Cohen. Sponsored by the Borough of Edinboro.

Thursday, July 25: “Tangled” (PG, 1 hour, 40 mins) – The magically long-haired Rapunzel has spent her entire life in a tower, but now that a runaway thief has stumbled upon her, she is about to discover the world for the first time, and who she really is. Based on the Brothers Grimm fairytale, “Tangled” was the 50th Disney animated feature film and stars the voices of Mandy Moore, Zachary Levi and Donna Murphy. Sponsored by Armstrong.

Thursday, Aug. 1: “Monsters, Inc.” (G, 1 hour, 32 mins) – In order to power the city, monsters have to scare children so that they scream. However, the children are toxic to the monsters, and after a child gets through, two monsters realize things may not be what they think. Nominated for multiple Academy Awards – and winning the award for Randy Newman’s original song “If I Didn’t Have You” – the film features characters voiced by Billy Crystal, John Goodman, Mary Gibbs and Steve Buscemi. Sponsored by Northwest Bank.

In the case of inclement weather, the film series will be held in the Pogue Student Center.