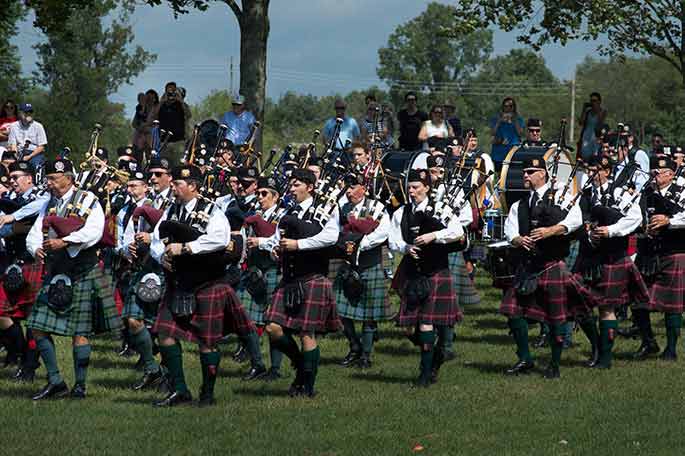 Join Edinboro University for the 24th Annual Edinboro Highland Games & Scottish Festival, which will be held Sept. 6-10 on the picturesque EU campus and various venues around Edinboro.

Festivities begin Wednesday, Sept. 6, with a single malt tasting from 6-8 p.m. in the President's Dining Suite in Van Houten Dining Hall. The music kicks off with the Tiger Maple String Band on Thursday, Sept. 7, from 6-9 p.m. at Sprague Farm & Brew Works.

“Tiger Maple is a local favorite —talented musicians and fun music—and many of their tunes have origins in Appalachia, which has roots in Scotland, Ireland and other Celtic cultures,” said Dr. Tim Thompson, director of the Highland Games and chairperson of Edinboro University’s Communication, Journalism and Media Department.

Thursday also features a Celtic Mandala Workshop at Scotland Yards Greenhouse from 6-9 p.m. and “Harping of the British Isles” at Fairview Presbyterian Church beginning at 7 p.m.

On Friday, Sept. 8, the First United Presbyterian Church in Edinboro will host the annual Scottish & Celtic Harp Showcase from 3-5:30 p.m. The showcase will be followed by several fun activities on the EU campus, including a fiddle workshop and the Regional Scottish Fiddle Championships. Both fiddling events are set for the Frank G. Pogue Student Center, at 6 p.m. and 7 p.m., respectively.

The evening will conclude with performances by the Chelsea House Orchestra and Diamond in the Rough at 7 p.m. followed at 8:15 p.m. by the lighting of the festival bonfire and calling of the clans on the lawns near the gazebo next to Mallory Lake on the EU campus.

The main festival events and games will be held throughout Saturday, Sept. 9, on the campus of Edinboro University, in and around McComb Fieldhouse at the corner of Scot and Scotland roads, and at the adjacent Pogue Student Center.

The beer-tasting tent opens at 11 a.m.

“If you get there before noon, you’ll want to see the opening ceremony. It’s spectacular, with the massed pipe bands marching and playing and the Scottish clans on parade,” Thompson said. “Between noon and 4 p.m., you can catch all the best the festival has to offer.”

Bagpipe and Scottish and Celtic harp music will fill the air throughout the day, while pipe bands and soloists march together and compete against one another. Between the impromptu concerts, musical tent and numerous workshops, burly heavy athletes will toss various weighty objects on the back lawns as part of the ever-popular heavy athletic competitions. Those events include the caber toss (flip a tree) and throwing hammer, stone, and 56-pound weights for height and distance.

The full schedule of Saturday’s events will run from approximately 9 a.m. until 4:30 p.m., followed by the Ceilidh (kay-lee) dinner and music from 6-10 p.m. in Van Houten Dining Hall North.

All festival events are free and open to the public, except the Ceilidh and the single malt tasting.

The Ceilidh features a delicious buffet dinner, cash bar, music and dance. Hosted by the Robert Burns Scottish Club of Erie, reservations are $35 per person.

On Sunday, Sept. 10, events close with a Chelsea House Orchestra concert at 10:45 a.m. at the Edinboro United Methodist Church.

All events will go on, rain or shine, with alternate locations set in case of inclement weather. Full festival information is available on the website at www.edinboro.edu/events/highland-games.