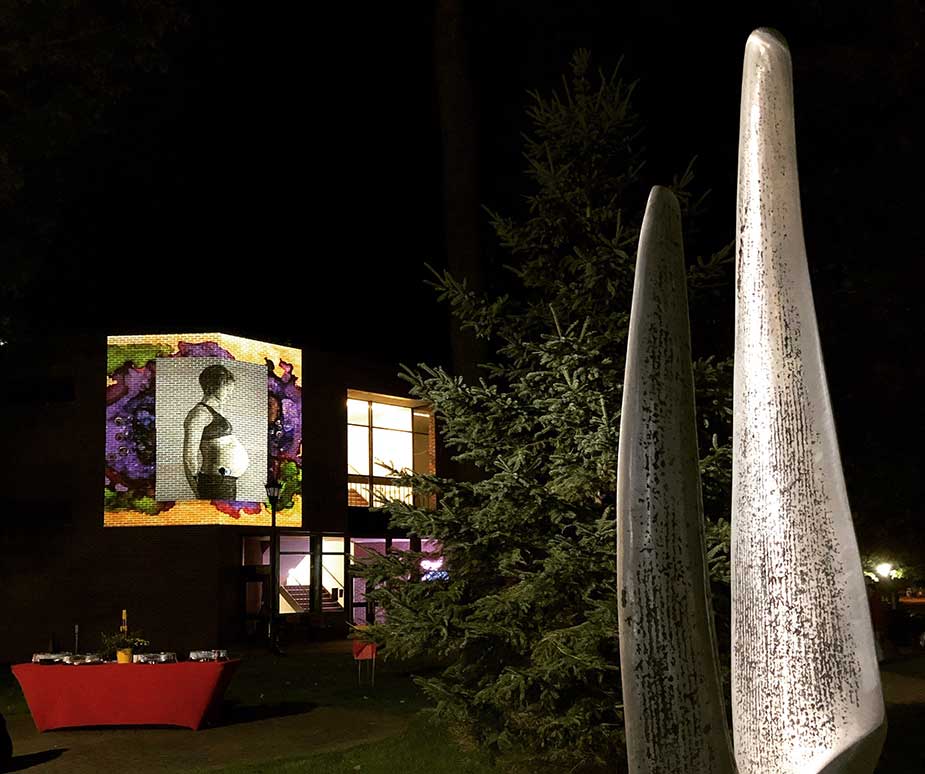 Brian Fuller, assistant Professor of Digital Filmmaking at Edinboro University, was honored with a Silver Telly Award for “ART100 Videoscape” – a film featuring work by faculty and graduates of the Edinboro University’s celebrated Art Department.

“ART100 Videoscape” was designed to be projection-mapped in four synchronized panels onto irregular building exteriors. It premiered in September 2019, displayed on corner walls of the Doucette Hall exterior in conjunction with an evening fundraising reception on the adjacent lawn.

“Maybe some people think of scholarship as a sidecar on the motorcycle of teaching,” said Fuller, whose professional accolades now include one silver and four bronze Telly Awards, three silver Davey Awards and an Emmy. “But honestly, it's essential that teachers of film be working producers of film. Only when ‘pracademics’ have projects of our own can we invite students to collaborate.”

“Apprenticeships like Delaney’s have been the model of arts instruction for centuries – because they work,” Fuller said. “At Edinboro, students aren’t just adding grades to transcripts; they are adding lines to resumes.”

Founded in 1979, the Telly Awards annually showcases the best work created within television and across video, for all screens. Receiving over 12,000 entries from all 50 states and 5 continents, Telly Award winners represent work from some of the most respected advertising agencies, television stations, production companies, and publishers, from around the world.

Fuller was awarded a silver Telly for Non-Broadcast Museum & Gallery films by a judging council of over 200 working industry professionals.

Edinboro University’s Art Department has offered instruction in film and video production since 1969. Graduates of the program routinely contribute to high-profile studios, films and television shows.