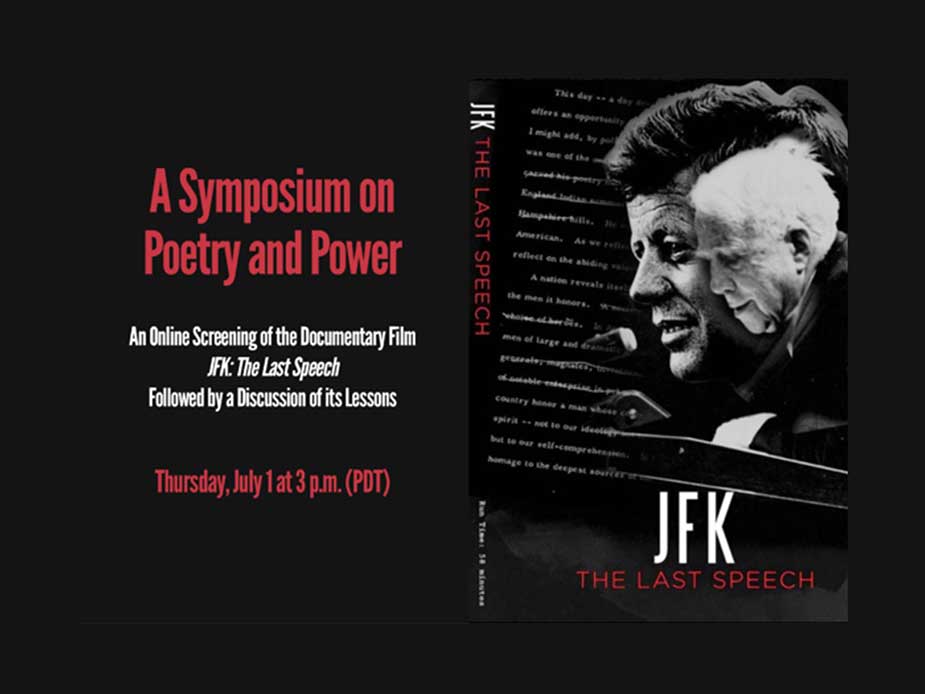 Edinboro University faculty member Dr. Robert Bernard Hass, from the English & Philosophy Department, is one of nine national speakers invited to present at “A Symposium of Poetry and Power,” a free online screening of “JFK: The Last Speech” documentary followed by a panel discussion.

Sponsored by Reunion ’64, Inc., Edinboro University, the San Diego Public Library and the Robert Frost Society, the virtual panel is scheduled for 6 p.m. on Thursday, July 1.

Hailed as one of his greatest speeches, Kennedy used the dedicating of the Frost library to implore Amherst’s students to use their educations in the service of the public good and to celebrate Robert Frost as an archetype of the artist in a free society

According to the event website, Kennedy hailed Frost as a guardian of democracy, as one who spoke most prominently to the “spirit and self-comprehension” of the nation. Kennedy perceived the artist’s dissenting voice as essential to the nation’s well-being.

Hass, a member of Edinboro’s faculty since 2001, specializes in creative writing, literature and poetry and is one of the nation’s foremost authorities on the poetry of Robert Frost. Throughout his award-winning scholarly career, he has won an Academy of American Poets Prize and has served on the editorial boards of Twentieth-Century Literature and the Robert Frost Review.

He has won an Academy of American Poets Prize, an AWP Intro Journals Award and a creative writing fellowship to the Bread Loaf Writers’ Conference. As a professor of English at Edinboro University, he has published widely on such figures as Robert Frost, Alfred Lord Tennyson, Wallace Stevens, T.S. Eliot, Hart Crane and Ezra Pound, and he currently serves as executive director of the Robert Frost Society.

Panelists in the virtual event include: