‘Movies Under the Stars’ returns to Edinboro campus for 2021 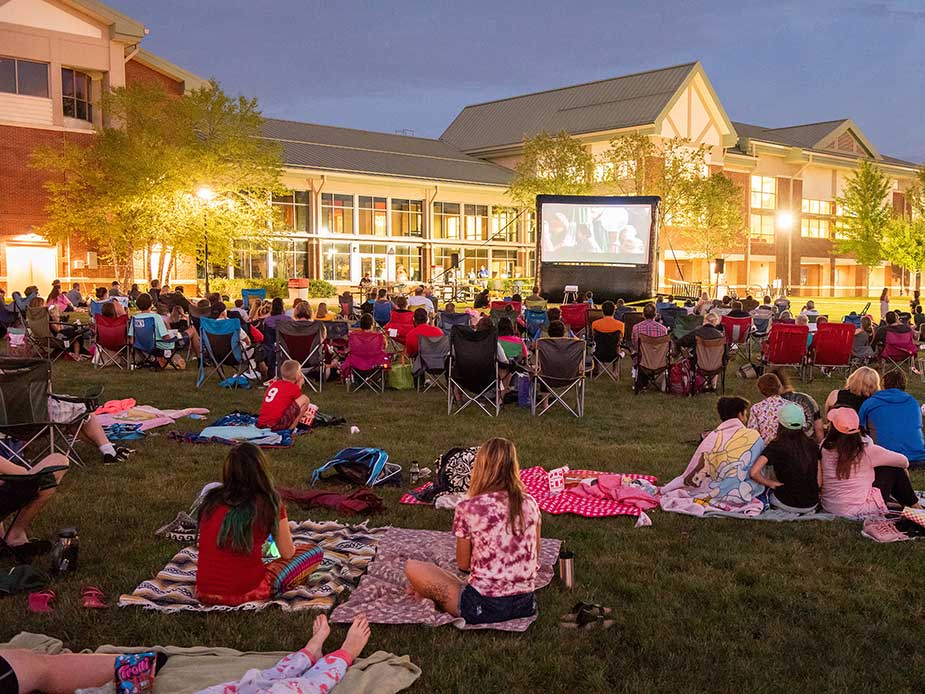 After a one-year hiatus, Edinboro University and the Borough of Edinboro are bringing back the popular “Movies Under the Stars” series for the fourth year – featuring a selection of free, family-friendly movies selected by the Edinboro community.

The outdoor movie series is scheduled for Thursdays during the months of July and August, starting July 15. Edinboro University will host the first three films on the lawn behind Frank G. Pogue Student Center, and the final three will be held at Goodell Gardens & Homestead (221 Waterford Street).

Movies will begin promptly at 9 p.m., with no cost for attendance. At the Edinboro University events, guests may park in the lot across from the McComb Fieldhouse or next to the Baron-Forness Library.

“Free, family-friendly entertainment is very important for small towns like Edinboro, and we are pleased and excited to be able to continue to offer this annual movie series for the enjoyment of our wonderful community,” said Jason Spangenberg, finance director of Borough of Edinboro and a 2014 graduate of Edinboro University.

Guests are encouraged to bring lawn chairs, blankets and their favorite movie-watching snacks.

July 15: “Mulan (1998)” (G, 1 hour, 28 mins) – To save her father from death in the army, a young maiden secretly goes in his place and becomes one of China's greatest heroines in the process. Featuring the voices of Ming-Na Wen, Eddie Murphy and B.D. Wong. Sponsored by Northwest Bank.

July 22: “Ice Age” (PG, 1 hour, 21 mins) – The story revolves around sub-zero heroes: a woolly mammoth, a saber-toothed tiger, a sloth and a prehistoric combination of a squirrel and rat, known as Scrat. Nominated for an Academy Award for “Best Animated Feature,” the film features vocal performances from Denis Leary, John Leguizamo, Ray Romano and Jack Black. Sponsored by McDonald’s.

Aug. 5: “The Incredibles” (PG, 1 hour, 55 mins) – Winner of two Academy Awards (Best Achievement in Sound Editing and Best Animated Feature), the story features A family of undercover superheroes, who are trying to live the quiet suburban life and are forced into action to save the world. Featuring the voices of Craig T. Nelson, Samuel L. Jackson and Hunter. Sponsored by Adagio Health.

Aug. 12: “Madagascar” (PG, 1 hour, 26 mins) – Longing to roam free in the vast landscapes of Mother Africa, Marty, the bored and dejected zebra of the famous Central Park Zoo, escapes his prison on the night of his tenth birthday celebration. A group of animals who have spent all their life in a New York zoo end up in the jungles of Madagascar, and must adjust to living in the wild. Featuring the voices of Chris Rock, Ben Stiller, David Schwimmer and Jada Pinkett Smith. Sponsored by Borough of Edinboro.

Aug. 19: “The Sandlot” (PG, 1 hour, 41 mins) –Scotty Smalls moves to a new neighborhood with his mom and stepdad, and wants to learn to play baseball. Rodriguez, the neighborhood baseball guru, takes Smalls under his wing - soon he becomes part of the local baseball buddies. They fall into adventures involving baseball, treehouse sleep-ins, the desirous lifeguard at the local pool, the snooty rival ball team and the travelling fair. Sponsored by Borough of Edinboro.

In addition to the individual film sponsors, Millennium Sounds Productions will provide audio setup for the movies at Goodell Gardens.