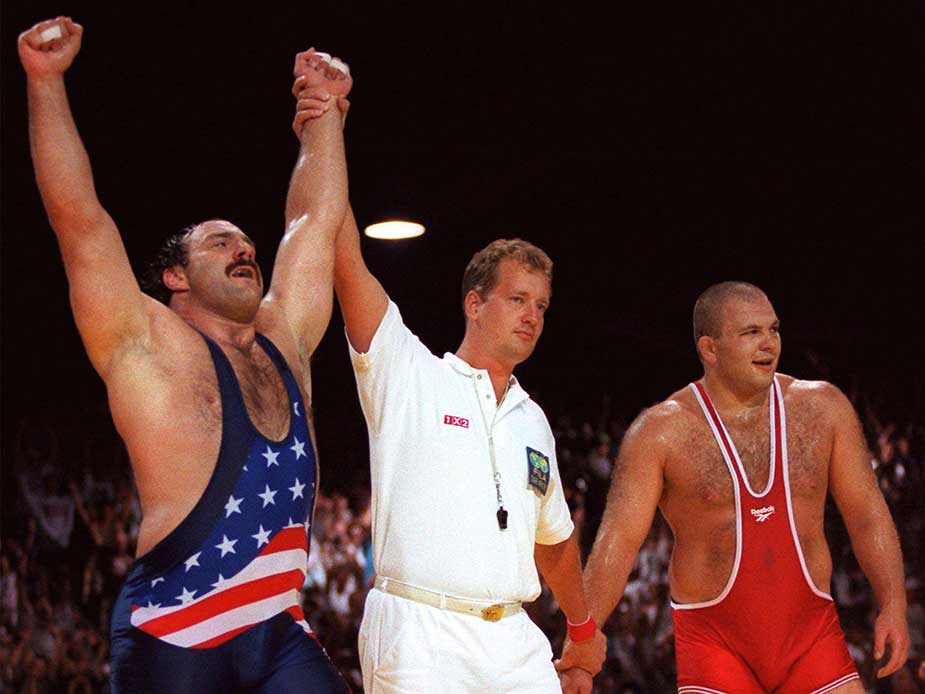 As the Olympics Games continue, California, Clarion and Edinboro universities – which are slated for integration in 2022 – are proud of those who shared the international spotlight in previous and current Olympic Games.

Trevon Jenifer* will help Team USA earn Paralympic gold in Tokyo this year, adding to his collection of medals including bronze in 2012 and gold in 2016. Jenifer earned his bachelor’s degree in criminal justice from Edinboro and a master’s degree in legal studies from Cal.

Kristin McDaniel served as graduate assistant to head softball coach Dan Gierlak while working on her master’s degree in special education at Edinboro. McDaniel was named an All-American Scholar-Athlete in 2008-2009 and in the fall of 2009 she served as a softball undergraduate assistant. In addition, she played on the 2008 U.S.A. Olympic Team in Bound for Beijing Tour.

Former Edinboro University standout wrestler Jason Loukides* was selected as one of Team USA’s Greco-Roman personal coaches in Tokyo, for John Stefanowicz – head coach for U.S. Marines. Loukides, who graduated in 1994, competed under Coach Baumgartner, finishing third in the 1994 EWL Championships at 190 lbs. He graduated with a career mark of 82-38-2 and was part of Edinboro's 1994 EWL Regular Season Championship squad.

Although not a student-athlete during his time at Edinboro, Rick Shimpeno developed a keen eye for athletics photography as a 1994 graduate with a bachelor’s degree. In October 2016, Shimpeno joined the staff of Team USA as the professional halfpipe coach.

Jose Leep was a standout for the Edinboro wheelchair basketball team. The native of Colombia played for the Fighting Scots from 2002-07. He was a four-time National Wheelchair Basketball Association Central Intercollegiate Division All-American. He competed in the 2012 London Paralympics for the Colombian national team, serving as the captain. Leep graduated in 2007 with a bachelor's degree in Spanish.

Former Edinboro University Athletic Director Bruce Baumgartner is no stranger to the Olympics. He has earned four Olympic wrestling medals – beginning with Gold at the Los Angeles Games in 1984. At the time a coach for Edinboro, Baumgartner went on to win three additional Olympic medals, including gold in 1992, silver in 1988 and bronze in 1996.

Lou Rosselli was a two-time All-American at 118 pounds for Edinboro, finishing third at the NCAA Division I National Championships in 1993 and fourth in 1991. He represented the United States in the 1996 Olympic Games. Rosselli earned his bachelor’s degree in health and physical education from Edinboro in 1993.

Gary Hanna, head athletic trainer at Edinboro, worked as a member of the medical staff at the 1988 Olympic Games in Seoul, South Korea.  He also served in various capacities at the USOC Training Center, the U.S. Olympic Festivals, and with USA Baseball and the National Sports Festival.

Coach Jim Glatch took over as Edinboro University’s coach for student-athletes with disabilities in 1995. Most noteworthy is his work as the head coach of the wheelchair basketball team. He ranks as one of the leaders both nationally and internationally in coaching wheelchair basketball. Glatch and his Team USA earned the bronze medal at the 2012 Paralympics in London, England.

Marty (Marczak) McLaughlin was a member of the Fighting Scots cross country and track and field programs – earning two All-American awards in track. She was a finalist for the 1992 NCAA Woman of the Year Award, and a 1992 Olympic Trials qualifier in the 800 meters. She earned a Bachelor of Fine Arts from Edinboro in 1993.

From Cal. U., Natalie Wideman* was an All-American catcher for the Vulcans from 2011-14 and helped Team Canada capture the country’s first-ever medal in softball at the 2020 Tokyo Olympics. As a senior, Wideman was chosen the NCAA Division II Catcher of the Year and named the PSAC Athlete of the Year.

Matt Antoine represented Team USA as a member of the men's skeleton luge team at the 2018 Winter Olympics. A winner of 11 World Cup medals in his career, Antoine earned his bachelor's degree in 2009 through Cal U Global Online.

Megan Timpf competed for Team Canada at the 2008 Beijing Olympics, which marked the final Olympics for the sport of softball until the 2020 Tokyo Olympics. She was an All-PSAC West First-Team selection in her first year playing with the Vulcans in 2006.

Meaggan Pettipiece was a member of the 1998 National Championship Team at Cal U before playing for Team Canada at the 2000 Sydney Olympics. An All-American outfield for the Vulcans, she also was an alternate for the 2004 Athens Olympics. Pettipiece currently serves as the head softball coach at Akron.

Rick Krivda was a dominant pitcher at Cal U from 1989-91 before being selected by the Baltimore Orioles in the 1991 MLB Draft. Krivda finished his collegiate career as the winningest pitcher in school history and eventually played four years in the Major Leagues. He earned a Gold Medal for Team USA at the 2000 Sydney Olympics, becoming the first Cal U student-athlete to win an Olympic gold medal.

Former Cal track & field coach Roger Kingdom remains one of only two runners to ever win consecutive Olympic titles in the 110-meter hurdles (1984 Los Angeles, 1988 Seoul). He served as a coach for the Vulcans 2004 until 2013. Since leaving Cal, Kingdom has served as a coach with multiple NFL teams and has served as the speed and strength coach with the defending-Super Bowl Champion Tampa Bay Buccaneers since 2019.

Following a successful career on the mat for Clarion University Bekzod Abdurakhmonov* earned a trip to the 2016 Olympic Games in Rio de Janeiro to compete for Team Uzbekistan. The former Golden Eagle defeated gold medalist Jordan Burroughs of the United States 11-1, but lost in the bronze-medal match to Jabrayil Hasanov of Azerbaijan. A 2012 graduate with a bachelor’s degree in sports management, Abdurakhmonov is slated to compete in the men’s freestyle event in the Tokyo Olympics.

An outstanding wrestler at Clarion University from 1988-1992, Kurt Angle was a 4-year starter and 3-year captain of the Golden Eagles at heavyweight. In the 1996 Summer Games in Atlanta, Angle captured the Gold Medal in wrestling. The two-time EWL and 3-time PSAC Wrestler of the Year graduated from Clarion in 1992 with a degree in Geography.

An outstanding swimmer at Clarion University from 1980 to 1984 who competed in the backstroke, butterfly, I.M., and freestyle events, Jeanne O'Connor was an 11-time Division II National Champion and a seven-time second place national finisher. A Clarion captain her junior and senior years, she qualified for and swam in the 1984 U.S. Olympic Trials in the backstroke. She earned her degree in 1984 in management.

An outstanding diver at Clarion University, Barbara Schaefer Nejman went to the Olympic trials in 1972 and was a member of the USA Olympic diving team in 1976 in Montreal, Canada. A 1989 Hall of Fame member at Clarion, Nejman earned her degree in Elementary Education from Clarion in 1972.

The architect of Clarion's nationally recognized men's and women's diving program, Don Leas had a 24-year career that was unequalled by any coach in the nation from 1966-90. His divers won 36 individual national championships and posted 234 All-America placings. He was in charge of the 1996 Olympic Diving competition in Atlanta, and served as International Chairman of Diving for the World University Games since the 1981 Games in Bucharest, Romania.

The athletes whose names are followed by asterisks are current Olympians competing in the Tokyo 2020 Olympics. Photo courtesy of AP.