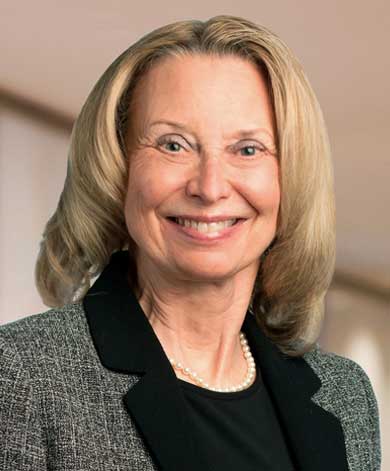 Pape is senior counsel with Saxton & Stump in Harrisburg, Pa., where she practices in the Regulatory and Government Affairs, Business and Corporate, Internal Investigations, and Mergers and Acquisitions groups. She previously served as a member of Edinboro’s COT from 2012 to 2020.

Prior to entering private practice, Pape was CEO and president of Pennsylvania American Water and head of American Water’s mid-Atlantic region, which included Pennsylvania, West Virginia, Virginia and Maryland.

Among other community involvements, Kathy is dedicated to several non-profit organizations and has chaired the Pennsylvania Business Council board of directors, the Foundation for Enhancing Communities, and the Pennsylvania Chapter of the National Association of Water Companies.

She is an active member of the boards of the Milton S. Hershey Medical Center, the Juvenile Diabetes Research Foundation (Central Pa. Chapter), the Earth Conservancy, the Hampden Township Industrial Development Authority and Highmark Health’s Board of Directors.

A 1975 Edinboro University alumna with a Bachelor of Arts in Political Science, Ms. Pape earned a Juris Doctor from The Dickinson School of Law and an LLM in Taxation from Villanova University School of Law.

The Council of Trustees is Edinboro University's governing body under the 14-university Pennsylvania State System of Higher Education.