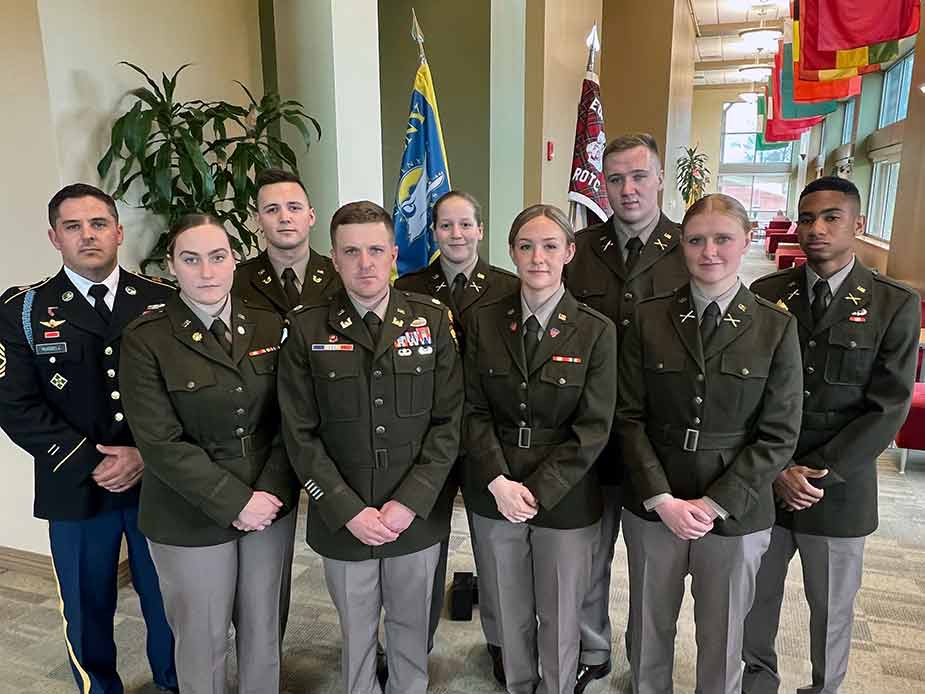 “We are proud to recognize the steadfast connection between two outstanding institutions – the United States Armed Forces and Edinboro University,” said Dr. Scott Miller, vice president of Academic Affairs and provost. “Through collaborative work with faculty members and also individual academic training, our newly commissioned second lieutenants have prepared to think critically, engage in their communities, and use the platform or their position to inspire the next generation of cadets.”

During the ceremony, Edinboro’s commissioned officers took the official Oath of Office as officials of the U.S. Government. Following the oath, each second lieutenant received their first salute from a relative, friend or cadre member.

The first salute – often called the “Silver Dollar Salute” – refers to the tradition of receiving one’s first salute from the sergeant who oversaw the officer’s pre-commissioning training.

This tradition originated in the early-1800s, when lieutenants-in-training received a monthly salary of $25 in base pay, $3 for rations and $1 to pay an enlisted advisor responsible for their training. The enlisted advisor pay was eventually discontinued, but the custom continues.

An enlisted member – whom the new officer deems as being instrumental in their personal leadership development – approaches the new lieutenant and renders a salute. The officer returns the salute and honors the soldier's contributions with a silver dollar.

“In the years to come, this class of cadets will demonstrate the greatest commitment to public service that has driven them to this level,” Miller said. “We honor our Fighting Scots battalion and praise their devotion to serving the United States.”

Emily Eason was commissioned as a Pennsylvania National Guard adjutant general officer. As a cadet, she was on the Ranger Challenge team and completed the international Sandhurst Competition held at West Point Military Academy. She earned a Bachelor of Science in Health and Wellness and a minor in Adaptive Leadership and Military Studies.

Gabriella Eberle was commissioned as an active-duty field artillery officer with a branch detail in military intelligence. She joined Edinboro University's ROTC program in 2018, as a student at Allegheny College. As a cadet, she competed on the Army 10-Miler team and was on the Color Guard team. She earned a major in International Studies, with a double minor in Political Science and Arabic.

Cole Fuller was commissioned as an active-duty field artillery officer. As a cadet, he competed in the Ranger Challenge competition for four consecutive years and was captain of the team his senior year. He will be stationed in Ft. Drum, N.Y. He earned a Bachelor of Arts in Communication and a minor in Adaptive Leadership and Military Studies.

Matthew James-Thrower graduated from St. Andrew's Episcopal in Potomac, Md. He went on to attend the United States Military Academy Preparatory school for a year before attending West Point in 2017. After three semesters at the academy, he transferred to Edinboro University to pursue a degree in Criminal Justice and join ROTC. He will be commissioned as a field artillery officer and earned a Bachelor of Arts in Criminal Justice with a minor in Adaptive Leadership and Military Studies.

Jack Parker has been accepted into the Army Judge Advocate General’s Corps Education Delay program, which will delay his active-duty service for three years while he attends law school at University of Virginia School of Law. Upon graduation from UNC Law, 2LT Parker will begin his career as an active-duty attorney in the JAG Corps. He earned a Bachelor of Science in Economics degree with a minor in English and a focus in Law.

Alexis Rodenbaugh was accepted into the Army field artillery officer program, active-duty service. While at Edinboro, Rodenbaugh was a member of the basketball team. As a cadet, she competed on the Ranger Challenge team, Army 10-Miler team, Canon Team, and Color Guard. She earned a Bachelor of Science in Strategic Communication degree with a minor in Adaptive Leadership and Military Studies.

Laura Zimmerman was commissioned as a Pennsylvania National Guard transportation officer. As a cadet, she played lacrosse for two years for Edinboro. She earned a Bachelor's of Science in Strategic Communication degree with a minor in Adaptive Leadership and Military Studies.

To learn more about the Fighting Scots Battalion and the journey from training to commissioning, visit www.edinboro.edu/ROTC.