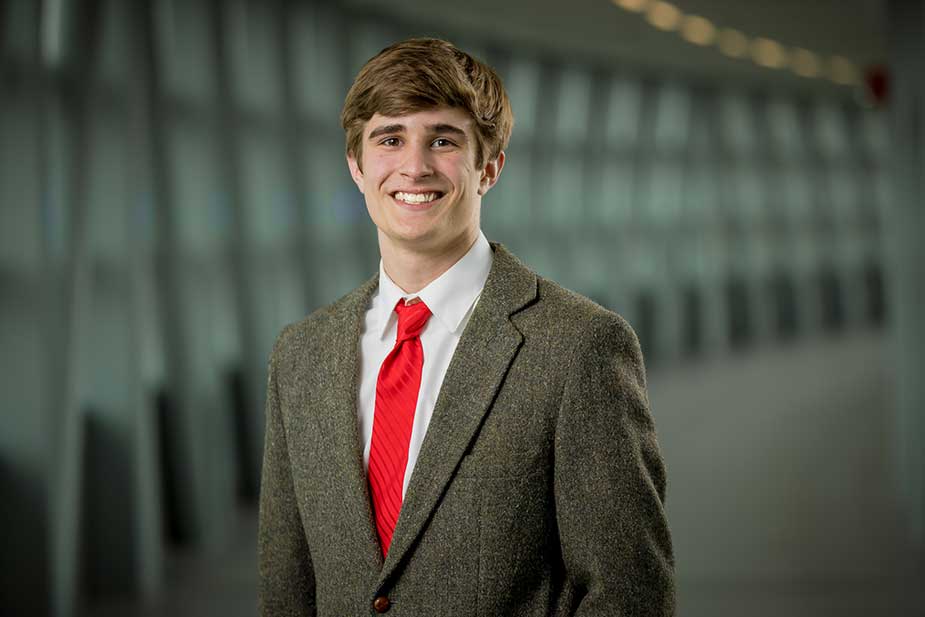 Edinboro University sophomore John Wheeler, a Psychology major and native of Albion, Pa., was appointed as the Student Trustee on Edinboro University’s Council of Trustees on April 15. Wheeler’s selection to Edinboro’s governing body was made by the Board of Governors of Pennsylvania’s State System of Higher Education.

Wheeler, who studies in Edinboro’s Honors College and is an active member of the Psych Club, assumes the role upon the May graduation of Kyle Hurysz, who was appointed Student Trustee in 2018.

Edinboro’s Student Trustee serves as a representative of the student body on the Council of Trustees with official voting capacity on key University issues.

“At first I thought it was intimidating because I’ll be working directly with the council members, but I feel like my experiences have prepared me to take on this role in a responsible manner,” said Wheeler, who is also pursuing a minor in Criminal Justice at Edinboro. “It’s an honor to represent the University. I’m very involved on campus – and I think that’s important – but there’s a lot more for me to contribute at Edinboro.”

During his time at Edinboro, Wheeler has also served as the lead counsel for the Mock Trial team, a member of the National Society of Leadership and Success and a frequent participant in the Chi Alpha program.

Wheeler hopes to share his passion for Edinboro, which he discovered as he was touring the campus and meeting with his Psychology faculty.

“I just got this sense that – if I came here – I was going to be cared for and the faculty was going to be with you every step of the way. And that’s what higher education is for,” he said. “Solid professors. Solid department. Solid school. You can’t really beat that.”

Cynthia D. Shapira, chairwoman of the State System’s Board of Governors, congratulated Wheeler on his appointment and explained that his involvement will have a broader impact on the entire State System.

“In a very real sense, you will be on the front line of our efforts to redesign the State System to ensure that we are able to serve our students, our communities and our Commonwealth far into the future,” Shapira said in the letter to Wheeler. “Because of selfless, dedicated leaders such as yourself who have agreed to be part of our cause, we are charting a more sustainable course for the future, and you will play an important role in that effort.”

During the April 16 Honors Convocation ceremony, Dr. Dale-Elizabeth Pehrsson, interim president of Edinboro University, thanked Hurysz for his nearly three years of dedication to the Council of Trustees and for his leadership to the University.

“Kyle has represented Edinboro University with distinction and enthusiasm, and we thank him for his service to the University and his fellow students,” she said.