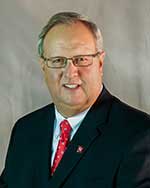 Robert J. Lowther, Jr. was named to the Edinboro University Council of Trustees in October 2014.

A 1977 graduate of Edinboro with a Bachelor of Arts in Social Science, he played basketball for the Fighting Scots and was enrolled in the Army ROTC Program. Upon graduation, he was commissioned as a Second Lieutenant in the U.S. Army and served as a Medical Service Corps officer.

Mr. Lowther and his wife, Carrie, founded Great Lakes Case and Cabinet Company in 1985. The Edinboro-based company is a worldwide manufacturer of data center and thermal management solutions. Among other business accomplishments, he was a finalist for an Inc. Magazine Entrepreneur of the Year award.

An avid supporter of Edinboro University athletics and the University in general, Mr. Lowther serves as a member of the Business Advisory Board, which provides advice and guidance to the Business and Economics Department.

The Lowthers have one daughter and three sons.